An abbreviated history of tea

Tea originated in Southern China sometime in the Shang Dynasty (1600 BC – 1046 BC). The commonly believed legend is that the Chinese emperor Shennong, who has also been credited for early Chinese agriculture and traditional Chinese Medicine, liked to drink his water boiled so that it was clean. One morning when he was drinking his hot water a leaf from the camellia bush flew into his water, he drank it, enjoyed the taste and as he started to make it part of his regular routine he it felt invigorated him.

Legend also suggests that Shennong, being a great herbalist, liked to experiment with different plants and would drink the tea as an antidote to plants that made him sick.

It wasn’t until the Tang Dynasty in the 8th and 9th centuries, when China had great cultural influence over Eastern Asian countries and by way of trade along the silk road, drinking tea became popular in Korea, Japan and Vietnam.

In the mid-1600s the Dutch traders took tea to Europe. Before this time, tea had always been green, however, it was discovered that fermenting the leaves into black tea preserved the aroma and taste longer and so black tea became the obvious choice for export.

Strong black tea with milk and sugar added became popular in Britain in the 18th century Industrial revolution. Factory workers would be served afternoon tea with sugar so they could work longer days. Boiling the water also was protective from water-borne diseases.

The British were also responsible for creating large commercial tea plantations in India as an attempt to break the Chinese monopoly on tea. Today, India is one of the largest tea producing countries, although 70% of the tea grown is consumed domestically.

It was the Dutch traders who brought tea to the USA also. By the American Revolution was widely consumed.

America made two huge contributions to tea. The first being iced tea, invented in Missouri at a trade show in 1904. It was a hot day and no one wanted to try the hot brewed tea being offered, so the tea merchant dumped ice in it to cool it off and iced tea caught on, so much so that today, 85% of tea consumed in the US is chilled.

The second American tea invention came about around the same time and was once again, a happy accident. A New York tea importer started sending small tea samples in hand made silk bags instead of boxes in an attempt to cut costs. The customers didn't realize the merchant intended the tea to be removed from the bag before use and they put the whole thing in hot water and soon there was a demand for his tea bags.

Tea, in all its various forms, is today the most widely consumed beverage in the world after plain water.

Tea leaves and the process of making tea

All tea leaves come from the camellia sinensis bush. At the processing stage, the tea maker may prevent oxidation altogether (such as when making green tea) or fully oxidize the leaves (such as black tea) or somewhere in between (when making oolongs). There are a number of chemical reactions that occur throughout the process to create the different teas, such as the chlorophyll in the leaf breaks down and the tannins are released, and these changes create the flavor, color, aroma and strength of the tea. (You can read more about the process of making tea here).

While tea consumption is not going to keep the doctor away if the rest of your diet and lifestyle is unhealthy, however it is widely recognized as a very healthy beverage choice. It’s high in antioxidants, hydrating and unless you add milk and sweeteners, tea is virtually calorie and fat free.

Green tea is the highest tea in polyphenols (an antioxidant) and is the only type of tea to contain catechin. The high antioxidants in green tea is thought to help stabilize cholesterol and blood sugar levels, be great for the heart and over-all health.

Black tea typically has more caffeine than green tea (but less than the average strength cup of coffee). The caffeine and theophylline in black tea will make you alert without raising blood pressure. Black tea is also high in antioxidants that help protect your bones and cells.

Oolong has similar health benefits to green tea, especially if just the top, small and tender leaves are used to make the tea as these leaves are higher in antioxidants. Mechanical harvesters will cut all leaves in their path so you need to look for brands that just hand-pick those best spring leaves such as Zealong Tea. Some tea drinkers find green tea a little hard to digest in which case switching to oolong maybe easier on the stomach.

Herbs, flowers and spices can be infused in hot water on their own or added to tea leaves for flavor and health. Here are some plants which can be added and the additional health benefits they may provide.

Chai is a blend of spices popular in India. Chai blends usually include cardamom, black pepper, cinnamon, ginger and cloves. The blend is full of antioxidants and anti-inflammatory and may help ease arthritis. 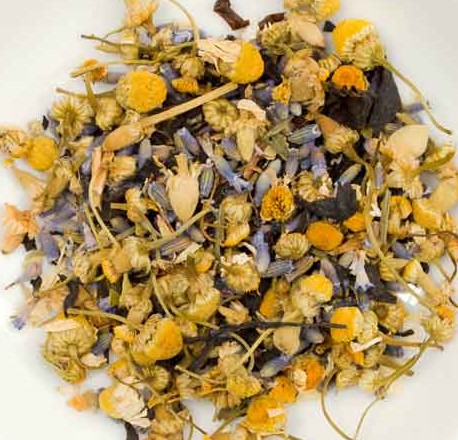 Chamomile flowers are a bright, happy yellow color and are best known to promote sleep, but also a great choice when you are stressed. Don’t throw away those tea bags, they’re awesome as an eye mask to reduce puffiness, in fact, topically chamomile is great for the skin.

Lavender is another calming flower. It’s beautifully aromatic and best known for relaxing the body and mind and inducing sleep.

Spearmint and Peppermint are both great for tummy issues, calming nausea, aiding digestion and reducing bloating, acid reflux and appetite.

Lemon myrtle is typically used in Australian aboriginal traditional medicine when suffering from the common cold or sinus infection. It’s highly antimicrobial and a great skin cleanser. Lemon myrtle may even help with repairing connective tissue reducing the appearance of cellulite.

Ginger is best known for calming motion sickness and nausea and it's also a great anti-inflammatory. Ginger and lemon myrtle together are an awesome combination when suffering from coughs, sore throats and colds.

The manuka bush is known best for the high antibacterial honey created by bees gathering nectar from its flowers, however the leaves are also antibacterial and add a sweet spicy flavor to tea.

Cinnamon is a delicious spice thought to help keep blood sugar and cholesterol levels in check and aid weight loss.

Kawakawa is a medicinal herb that has been used for centuries in New Zealand for stomach aches, bloating and digestion.

Jasmine blossoms have a beautiful scent which is partly why they are calming and destressing. Popularly blended with green tea leaves in China.

Tulsi, also known as Holy Basil or Indian Basil, is used to treat many ailments in traditional ayurvedic medicine but particularly anxiety and adrenal fatigue.

The content of this blog is for informational purposes only and does not constitute, nor does it intend to constitute medical diagnosis, treatment or other professional medical advice. You should seek prompt medical care for any health concerns or before making a change to your regime.